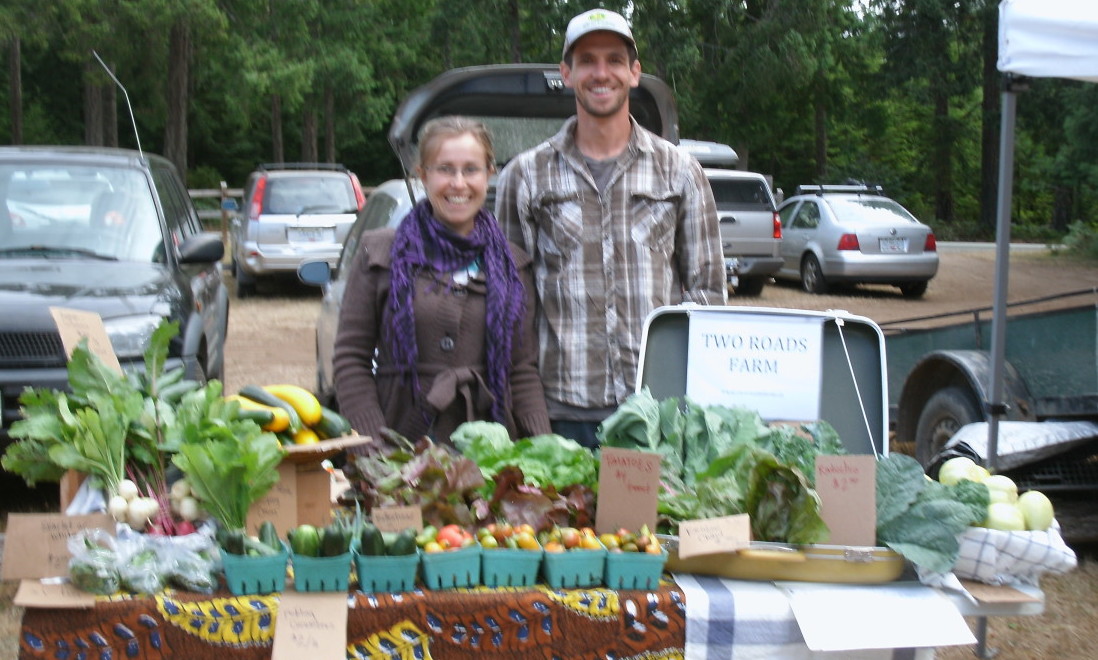 Oh those long, plump, fleshy tomatoes, those huge, crisp red radishes, the small, elegantly pointed cabbages, the bags of baby romaine! Two Roads Farm has come a long way and built a devoted clientele in the two and half years of non-stop work since Sam Croome and Emily Anderson started work on their land in January 2015. The 10 acres on Northwest Road, originally part of the parcel belonging to the pioneering Piercy family, who once used it for rough pasturage, had largely reforested. After digging numerous holes to the bewilderment of the realtor, they decided the land had some good points: above all, plenty of water that could be pooled, good drainage, and protection from prevailing winds (which can make a 10 degree difference in warmth).  The soil? Good enough.

There are other advantages. Small farmers heading into Vancouver from Pemberton to sell a truckload of vegetables can face a 2 ½ hour drive. Compared to that, the Denman ferry is not a serious obstacle. Only five minutes away from the farm gate is the General Store, which Two Roads now helps supply, and the Saturday Market is hardly a trek.

Sam and Emily both come from families with farming roots They have qualifications in somewhat related areas, Sam in forestry and Emily in environmental studies. Though their academic qualifications do not tell them much about farming, they are useful, because, Emily points out, “they help to see farming in a more comprehensive way.”

To learn about farming in BC, they apprenticed on a small farm in the Pemberton area, and spent time learning from other farmers in Pemberton and on Saltspring Island (amongst others). In the process they also became part of a vital community of small organic farmers who depend on each other to solve problems and get things done.

A critical inspiration was the writing and teaching of Jean-Martin Fortier, something of a rock star of the small farm movement. Based on the cultivation of 1 ½ acres in Quebec, Fortier demonstrated that it was possible to gross well over $100,000 an acre  with a 40% profit margin – eye-popping returns that have inspired flocks of devotees around the world.

Two Roads reflects much of Fortier’s approach: constant enrichment and care of soil rapidly depleted by intensive crop rotation; narrow, raised beds; organic treatments for pests (such as a massive slug infestation this spring), and high quality vegetables of a type likely to fetch a good price. So, potatoes will have to wait, at least for now.

Minimizing soil disturbance is crucial.  A flail mower is used to beat some crops down to create a living mulch, and Sam uses a walk-behind tractor to avoid compacting soil.  As the small organic farm movement grows, more machines, scaled to small farm needs and designed to automate some of the tasks, have started to appear. They have a small precision seeder for crops like carrots, and shallow tiller that can be run over the raised beds to produce a fine tilth for seeding. They have their eye on a small-scale Japanese paper pot planter than can transplant seedlings. But the fact remains that there is a great deal of manual labour. It is also data intensive. Each plant crop has its own set of records and spreadsheets detail the planning on a weekly basis.

Sam and Emily grow to the Canadian Organic Standard but are not yet willing to take on full organic certification. The main reason is the cost for a one acre farm, but they also cannot spare the time for the extra burden of documentation and correspondence required by the certification bodies who conduct inspections. As Sam emphasizes, it seems backwards that we have to pay to not use chemicals. In any case, Emily feels that reliability and an abundant supply of fresh and interesting produce have been more important than certification in building customer trust and confidence. Fronting on Northwest Road where people can check out what’s going on as they drive by has also helped.

Crop planning, growing and harvesting are only half the picture. There is the infrastructure – the drains, ponds, land clearing, removal of roots and stones, and fencing, not to mention fixing a home, and building greenhouses, and outbuildings for storage and processing.

There is help. The black pigs do a great job of clearing ground of roots, stones and even garbage like buried plastic containers and bottles. They are kept until they are 6-8 months old, during which time they put on large amounts of muscle and grow to 200-250 pounds. After that they start to accumulate a high proportion of fat.

There have been nasty surprises. Last spring, they were really worried that the long winter and unexpected snow in early spring could scupper their growing plans and make it hard to continue. But they have also been blown away to discover that demand on Denman is enough that they do not have to look to Comox/Courtenay to sell most of their produce as they originally expected. Denman has helped them with cash flow too, by supporting a Market Card program. The scheme allows customers to pay up front for vegetables and supply themselves as needed –  much preferable to delivering baskets of vegetables every week. The community has even used the program to support others in the community, with community members suggesting and supporting a Pay It Forward card, a market card that accumulates community donations, and can then be used to buy vegetables by those who could use a hand paying for them.

As the slash piles indicate, Two Roads Farm is expanding. Another acre will be in production by 2019. Two acres will be enough to provide a reliable income, but that’s the limit for their place on Northwest. Leasing a little more land for crops that don’t require a lot of attention, such as winter squash, is another option, allowing them to expand production without all the costs of land clearance.

In the meantime, Jean-Martin Fortier has taken on a 10 acre farm to see if his model of intensive small farming scales up. He’s reportedly become involved in this enterprise with the Quebec business mogul Paul Desmarais who is interested in developing a turn key model where you can buy a small farm with all the infrastructure already in place – a big head start that might also be easier to finance than vacant land. That may be necessary if Fortier’s Mao-like dictum (“Instead of farming for the masses, get the masses farming!”) is to be realized, and New York to be kept in patty pan squash and radicchio by small farms. But in fact, Two Roads harks back to an earlier era of local sustainability, when Denman more or less fed itself, sold its apples, and the New Yorks of this world be damned.

Published in the Islands Grapevine, October 2017

Two Roads has a lively, informative website with a great farm diary – and interesting notes on growing coffee from their time in Costa Rica.