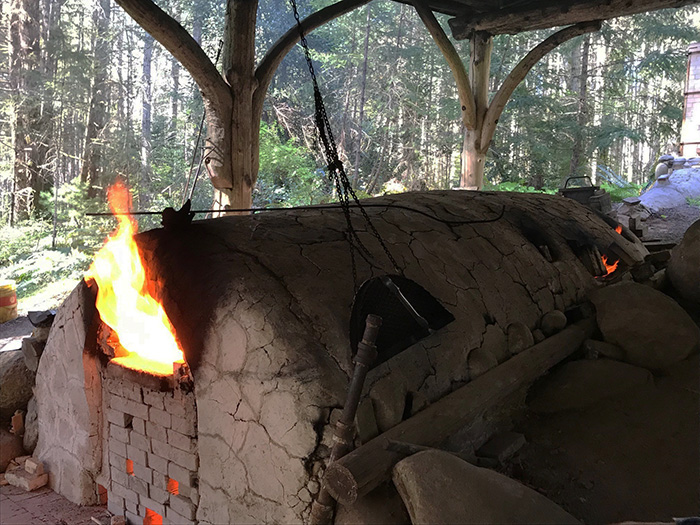 The Firing: Denman Island’s gathering of potters at an outdoor wood-fired Anagama kiln

In some ways, the Japanese have a natural affinity for the West Coast, not only because they thrived on the coast as fisherman and farmers. Our feelings for rocks, for moss, for crooked trees on outcrops, for the whole idea of nature as a meditative space owe a great deal to Japanese cultural influences, as does our appreciation of pottery.  The difference is that here they are influences and not traditions, elements of the fusion which increasingly characterizes the Coast.

Maybe that is why the firing of Gordon Hutchens’ great tozan-style anagama kiln is one of the most authentic experiences the Islands can offer. While the kiln is built on carefully researched historic designs, potters use it to make new statements in their work, to explore tradition but also the reaches of their own creative freedom. Gordon himself is a prime example, working in a remarkable range of techniques.

This year is the twentieth anniversary of the kiln, which is used by potters up and down the coast working in stoneware and porcelain. Pottery was a way for newcomers to the islands to support themselves, so the kiln was a major investment that benefited everybody. The kiln burns wood in a way that the ash does not settle but is sucked from the firebox into the firing chamber where it blows around the pottery and adheres to the surface as a glaze and creates interesting colour effects.

“It is ceramics,” Gordon says, “at its most elemental. The firing depends entirely on the quality of the wood, the rhythm of the feed, and dampers.”

The kiln was built by Yukio Yamamoto, a master kiln builder, potter and sculptor from Himeji City. Yukio was instrumental in reviving the tozan style of anagama kiln which was at its height around 1600 when the kilns mainly provided wares to Himeji Castle. As demand declined and fashions changed, the kilns were abandoned and fell into ruin. Yukio researched the kiln designs through field work as a thesis project. His work has succeeded in reviving the tozan -style anagama kiln, especially in a country which reverences tradition, even lost traditions.

Gordon got to know Yukio on a trip down to the University of Arizona at Flagstaff where Yukio had built several tozan-style anagama kilns. Gordon was discussing with others the possibility of building such a kiln when Yukio introduced himself and offered to help him build the kiln. Gordon held Yukio in such awe that he would never have asked himself so this was a sort of miracle. No sooner had he expressed his gratitude than he was immediately issued with a list of the requirements, starting with the kiln shed which had to be ready for his arrival.   Gordon is not one to skimp on effort. The kiln is housed under a great sculptural shed of monumental design, a major project in itself, built of massive timbers felled on his twenty-acre property. Gordon worked out the design with Jon Lebaron, who undertook all the Brobdignagian joinery and construction.

The inner core of the kiln is made of recycled nine-inch fire brick covered by a cement plaster. The bricks came from the Crane factory in New Westminster where they had a huge industrial-scale tunnel kiln to mass produce toilet bowls and other porcelain fixtures. The pieces were loaded on train cars on a moving floor that were gradually pushed by hydraulic rams through the kilns at varying stages of the firing process. After years of operation, Crane moved the manufacturing to China and abandoned the kiln. Potters like Gordon, and other “itinerant brick hoarders” were given permission to dismantle the kiln. He salvaged about 2500 bricks – twelve pallets of 230 bricks each which Wes Piercy helped haul the pallets to the site with a tractor. It’s amazing what resources Denman can produce when you really need them.

Yukio arrived with a translator and a number of student helpers, and together, the foundation was dug out. He then sculpted the long, tapering funnel of the kiln interior out of plywood, shaped and patched together over wooden forms that he tapped together. The floor was laid and the interior form carefully bricked over. Finally the forms were removed from the inside and the exterior was plastered over in cement. The work took over three years.

All anagama kilns are built on a slight slope to take advantage of the updraft so the taper of the interior up to exhaust flue is an important matter of judgement. Pottery is placed on a rising series of broad steps.

The tozan-style have a wider firebox that allows Gordon to use bigger and more awkward chunks of wood, making better use of the fuel at hand. The flue is also much longer and the exhaust chimney much taller. The underground flue on Gordon’s kiln is almost as long as the whole kiln itself and ends in a 12 ft chimney. Yukio felt that this arrangement results in a more interesting play of flame and a more complete burn.

Anagama kilns have no separation between the firebox and the firing chamber so the fly ash settles on the pieces. The great variation in the natural glaze produced between the heat, ash, and clay minerals of the ceramics depends partly on where the piece is stacked in the kiln.  In fact, stacking an anagama kiln is said to be the most difficult part of firing because the potter must imagine the flow of the flame through the pieces. 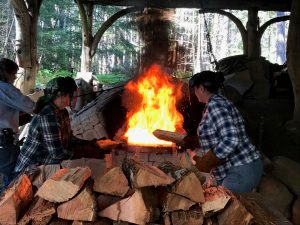 Considering that each firing takes about five chords of wood, the kiln is ideally located. All the fuel comes from his property and Gordon has never had to fell a live tree for firewood. Dead trees, blowdowns and accumulated detritus have usually been enough.

The kiln is fired twice a year. With the demand for so much preparation, energy and attention, the firing is more than just an exercise in technical proficiency: it becomes a rite. Gordon’s talk at the start always stresses the need for positive energy and respect for the process. 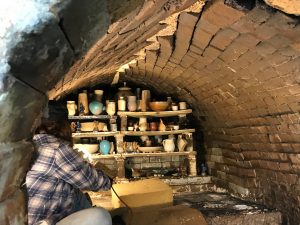 Tonight, there are about five hundred pieces inside the carefully managed inferno. Wood, both dampened and dry, is piled on a table in front of the glowing fire box. Gordon sits by the front, in a lawn chair, monitoring the temperature on various meters, now at about 2000 degrees F. Periodically he gets up to pull out a brick and check the firing cones inside which melt in sequence as the temperature rises, a modern innovation unknown to the Himeji potters who were guided mainly by the traditions born of hard experience. The firing crew chats and hangs about, but springs into action as soon as the kiln needs feeding. Visitors come and go. It seems like the most natural place in the world to be, a place of making, like a hearth is always a centre of community.   The glowing energy of the kiln creates a palpable excitement, yet there is also remarkable repose, calm in the forests of the night, with flames shooting up from the exhaust chimney and billowing forth from side vents.

The kiln will take as long to cool down as it does to fire. Saturday will be the big day when the kiln is opened, and the Pottery high season will begin.

Article by Tony Gregson, originally published in the Islands Grapevine, May 2018.