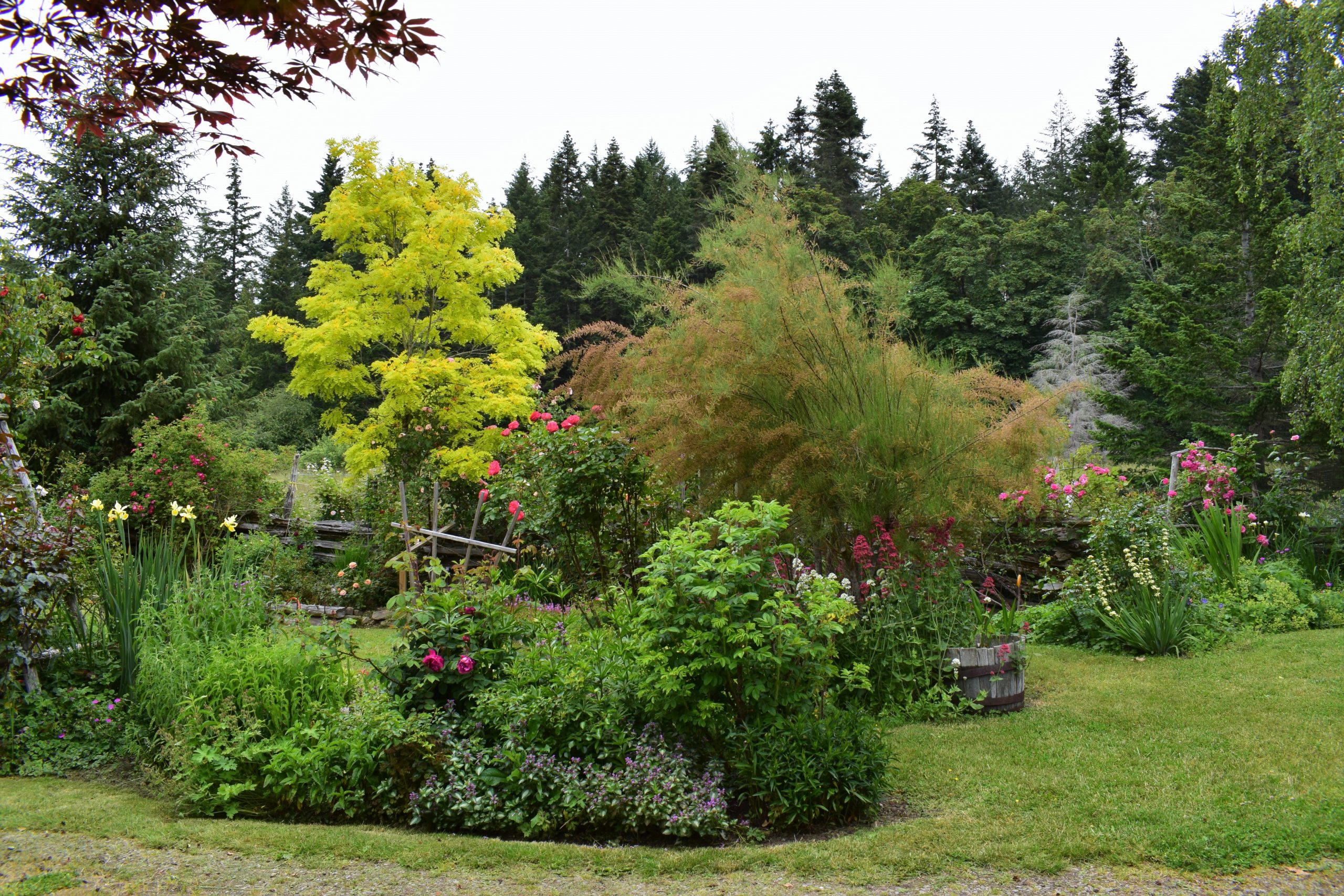 Take a Garden Tour for Inspiration!

Gardeners, nature lovers and dreamers of all ages will be enchanted by a stroll through Phyllis Brewers Denman Island garden. Wander the paths beneath trees and blooming archways through three acres of mature gardens cultivated over the past 45 years and immerse yourself in the sights and scents of a stunning collection of hundreds of roses, rhododendrons and clematis tumbling over trellis, fencing and gazebos. There are also many varieties of hibiscus and azalea, large plantings of Romneya Coulteri (California tree poppy), and plenty of perennial geraniums that serve as ground cover. The garden is anchored by 18 fruit trees, a Copper Beech, and several mature firs, hemlock, cedar and spruce. Every corner of the cultivated area has windows or pathways into the next, leading you to explore further. Weathered split-rail fences blend seamlessly into adjoining fields and forests and westward glimpses of Vancouver Island mountains. 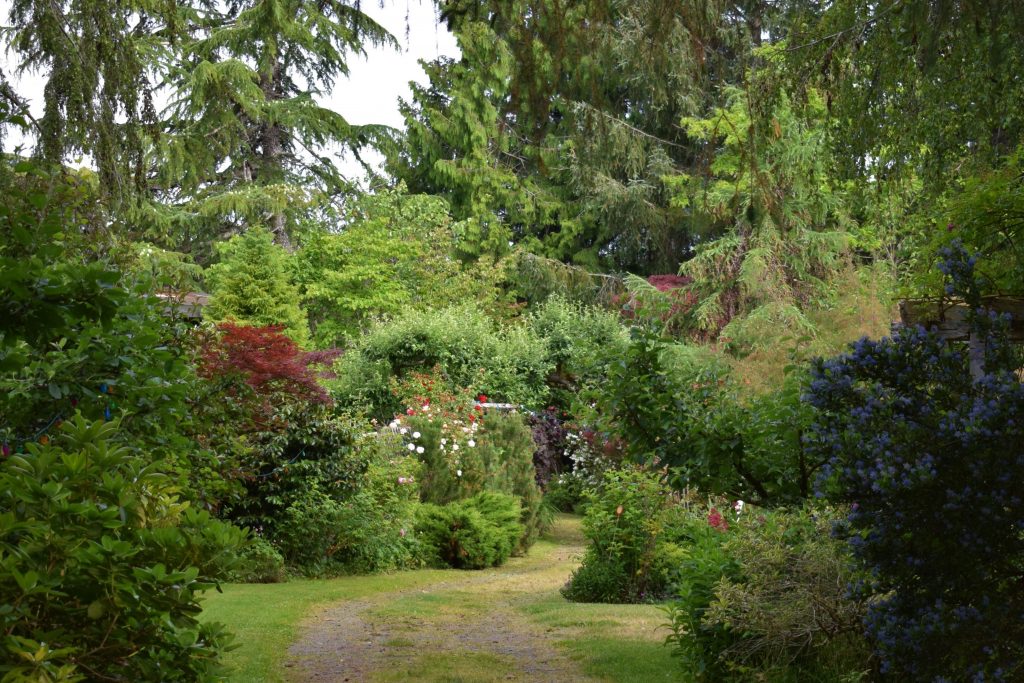 Garden view as you enter the gate. 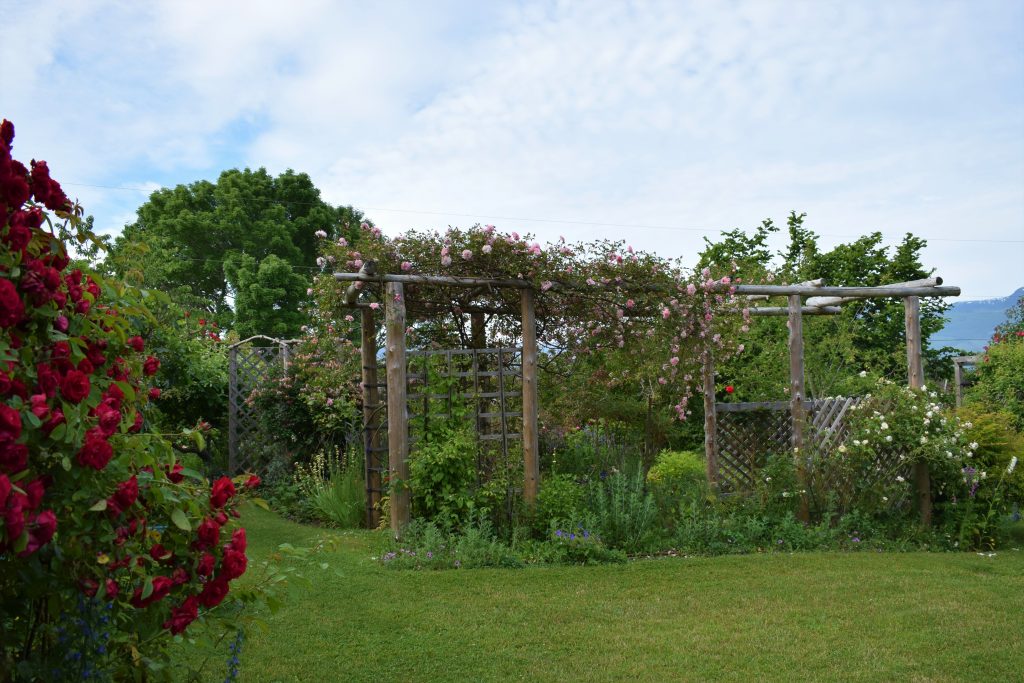 When she moved to Denman Island in 1975, the original property was 30 acres of hay fields with five heritage apple trees that ‘Old Mrs. Piercy’ (Celena, an early Denman settler) told Phyllis were over a century old at that time. The last of those apple trees fell this year, baring the established shade garden beneath it. A young new tree will take its place.

The garden is ever-changing to accommodate growing trees and shrubs, to replace fallen ones or poor performers, and to suit her latest interest.

Phyllis says she wasn’t always a flower gardener. The garden focus was on growing vegetables, while chickens free-ranged on the rest of the property.

She joined the local garden club in the early 80s and absorbed everything from Denman gardening gurus Marie Bohlen and Jimi Tait. “I was there to learn; I didn’t know anything about flowers.” She started creating the inner circle floral garden around the house and gradually worked her way out.

She grew a passion for classic roses and anything unusual.

For years the garden welcomed guests to private garden club functions and dinners. It’s been on the iconic Denman Island Home and Garden Tour several times.

Though the social gatherings are fewer, the garden is still a priority. Phyllis spends several hours a day in the garden, weeding and making lists for the gardener. In Spring, she adds a weeder to her gardening team, and this year I feel lucky to spend two mornings a week there – both to enjoy the garden and to learn.

Wisteria drapes the house in May.

In April I witnessed the transformation of bare soil to metre-high peony bushes; of short, woody vines to high-climbing clematis blossoms (more than 60 in the garden, often supported by large rose plants). In May the stunning lavender Wisteria spilled from the roof, and the huge 25-year-old purple rhododendron bloomed over the southwest corner of the house. 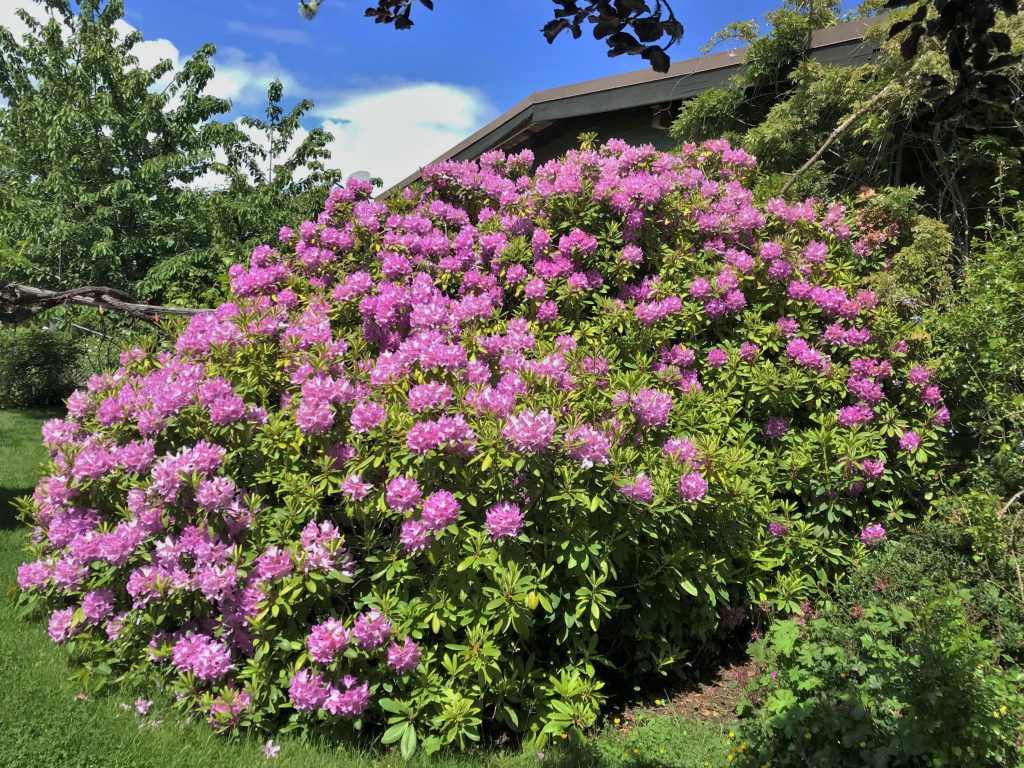 A 25-year-old Rhododendron blooms in May.

And June is rose month. At one time the garden held about 300 rose plants, and while there is no official count today, roses of all colours, varieties and sizes fill every corner of the garden, climbing trellises, structures and trees.

A star of the garden is the “Rose Waterfall” behind the garage which appears to be tumbling down from a mountain ash tree in an incredible display of pale pink, white and crimson climbers. Even the 4 by 24-foot compost area is neatly hidden behind a wall of roses. 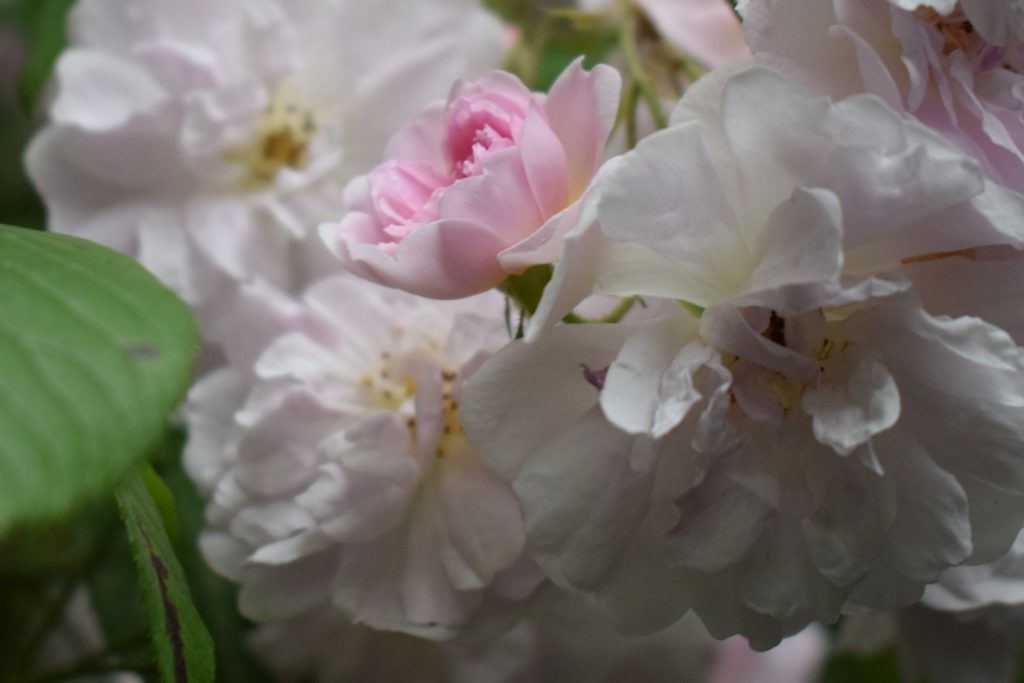 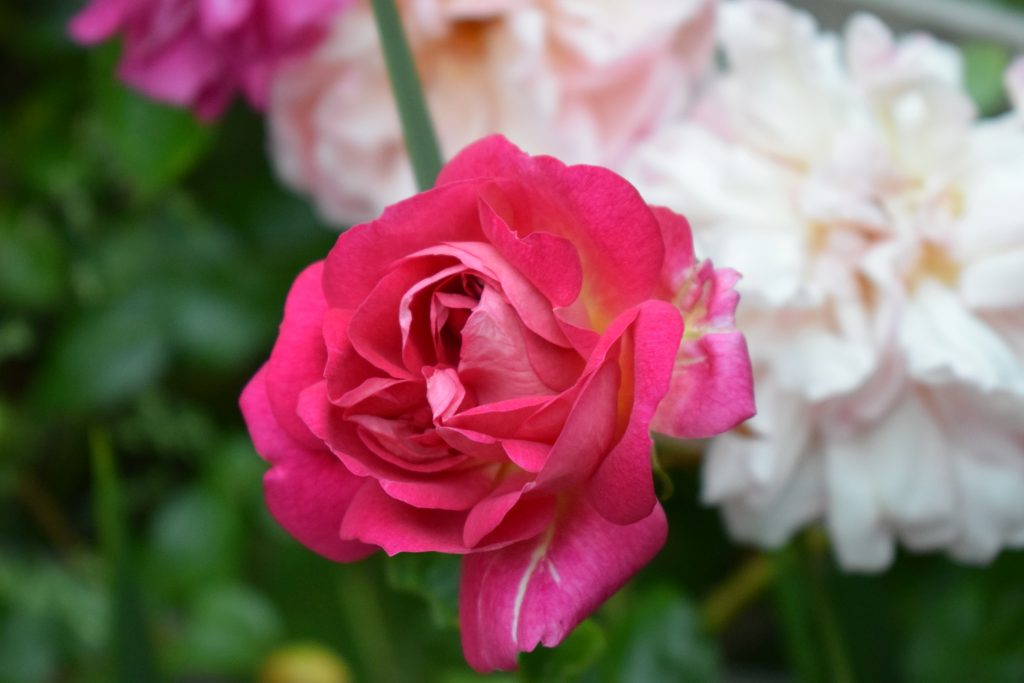 She loves them all but does commit to some favourites.

“If I could only have one rose, it would be Royal Sunset. It’s so fragrant, with good glossy foliage, the petals transition from pale to deep coral, and it’s very recurrent. It’s one of the first to bloom and I actually had one bloom one Christmas day.”

New plants and plantings are added every year. Right now, she’s looking to add two red-fruited pear tress – a Bartlett and an Anjou. Let her know if you have one when you visit!

The garden, at 2105 Northwest Road, is open to visit on Fridays from 10 a.m. to 4 p.m. through June and July, by donation for the Denman Island Food Bank.

Drive down the lane through the forest and park on either side before the gate. A button on the right side of the gate lets you in and will close automatically behind you. Phyllis recommends starting your tour on the East (right) side of the garden, follow the road through the garage, past the rose waterfall, then circle left through a labyrinth of paths and arbours. Stop for a rest at the table and chairs beneath the Copper Beach tree by the fountain. 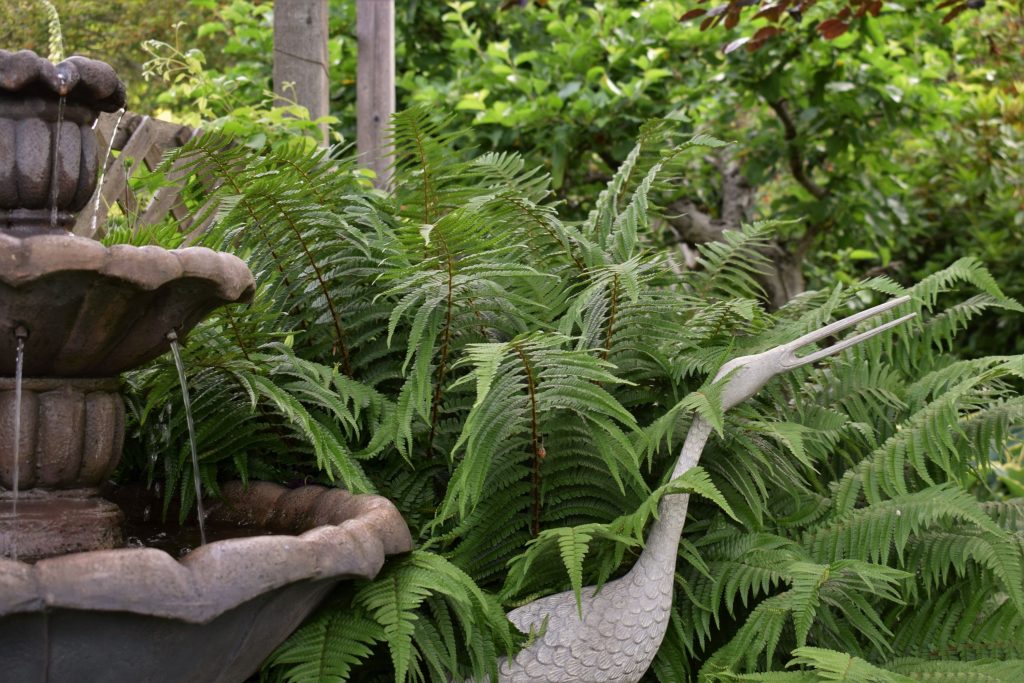 A fountain in the shade. 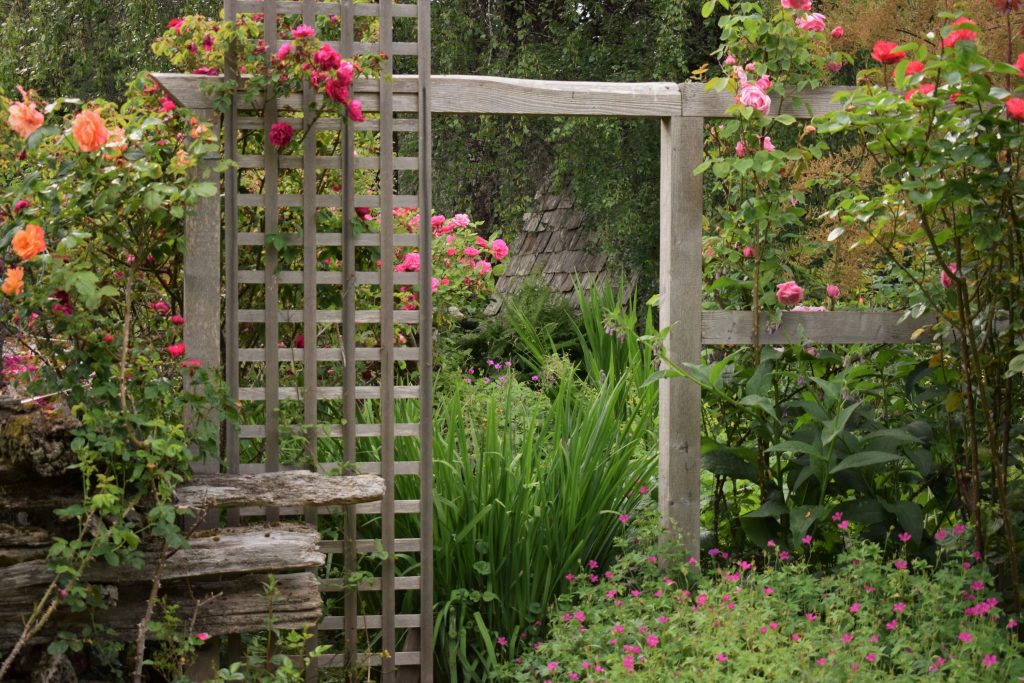 Arbors & trellises offer peeks into the next garden area. 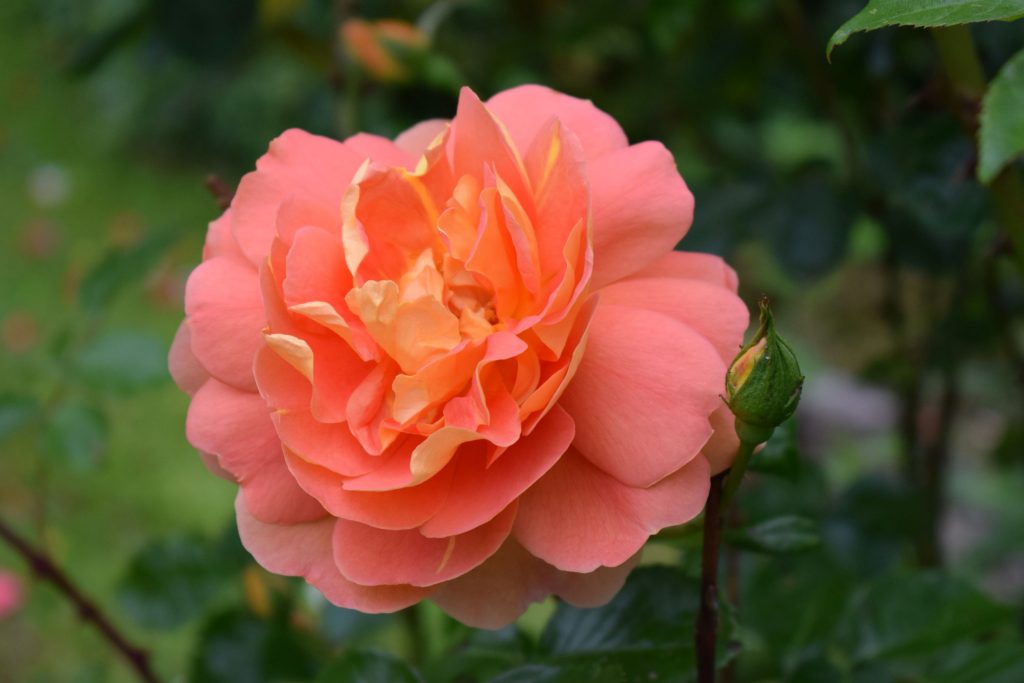 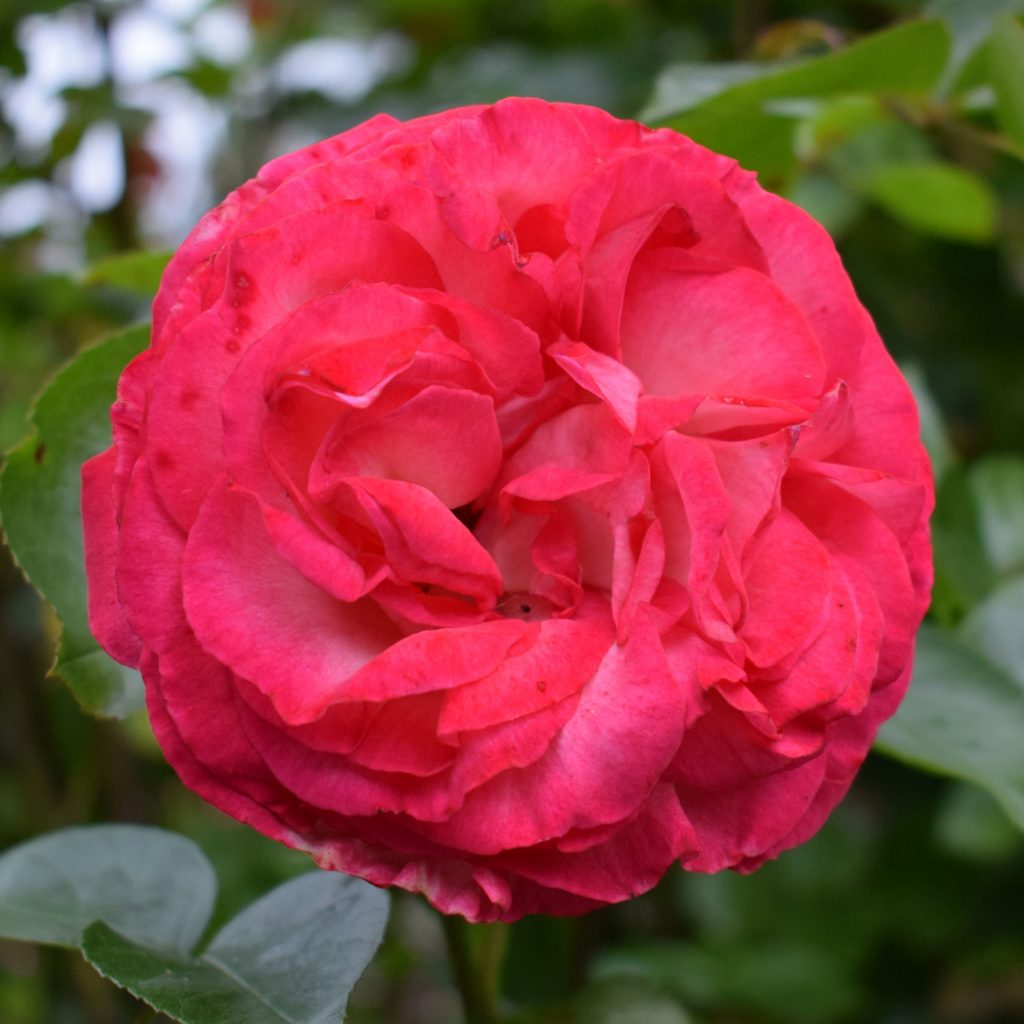 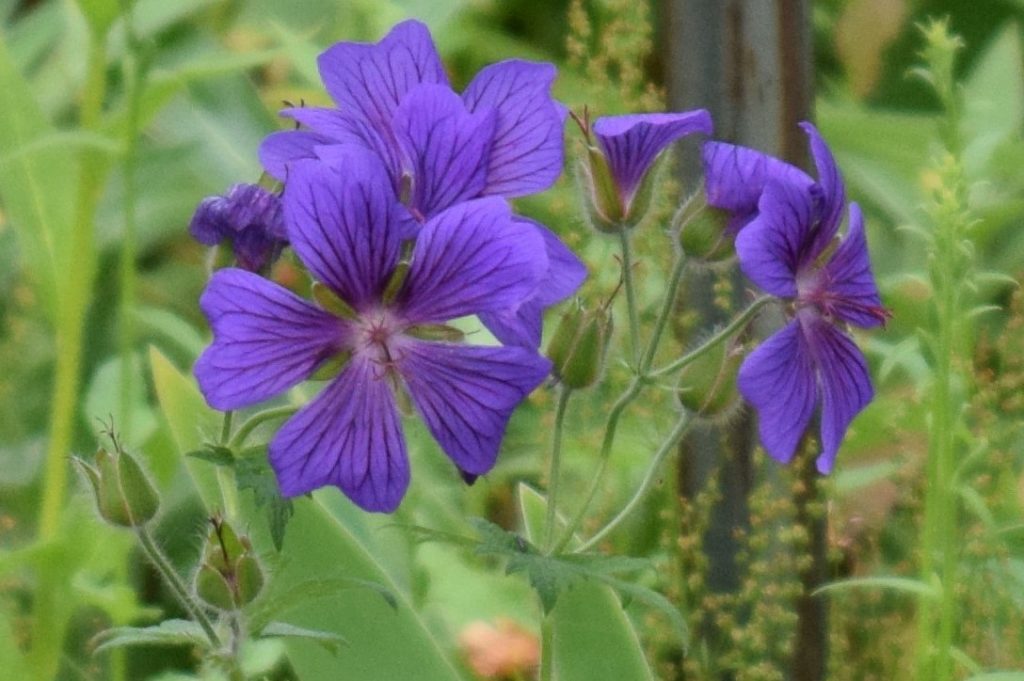 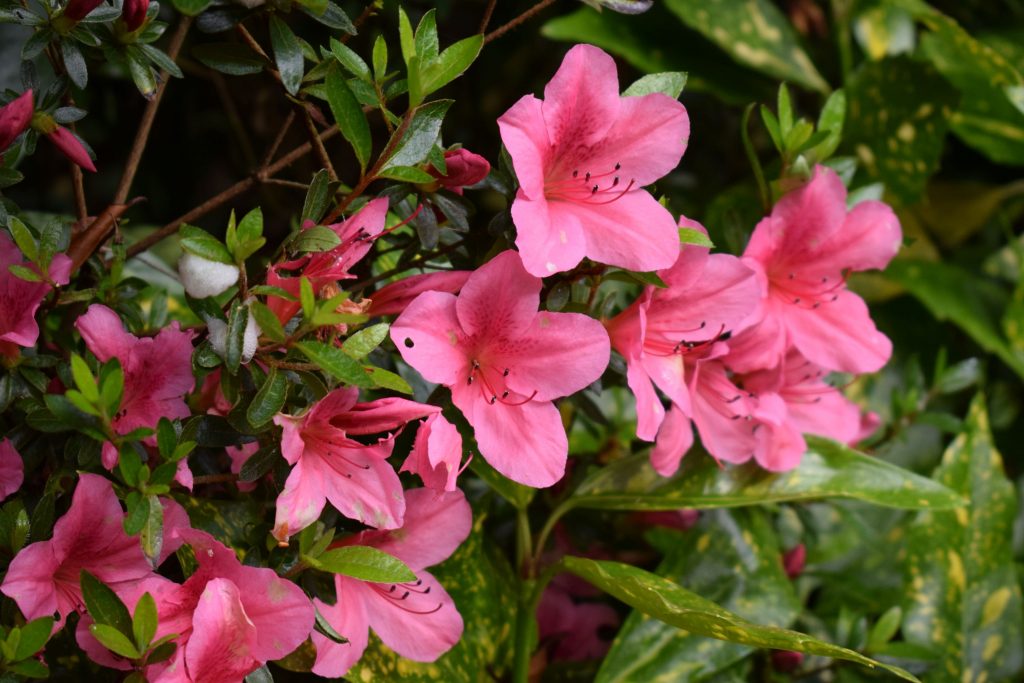 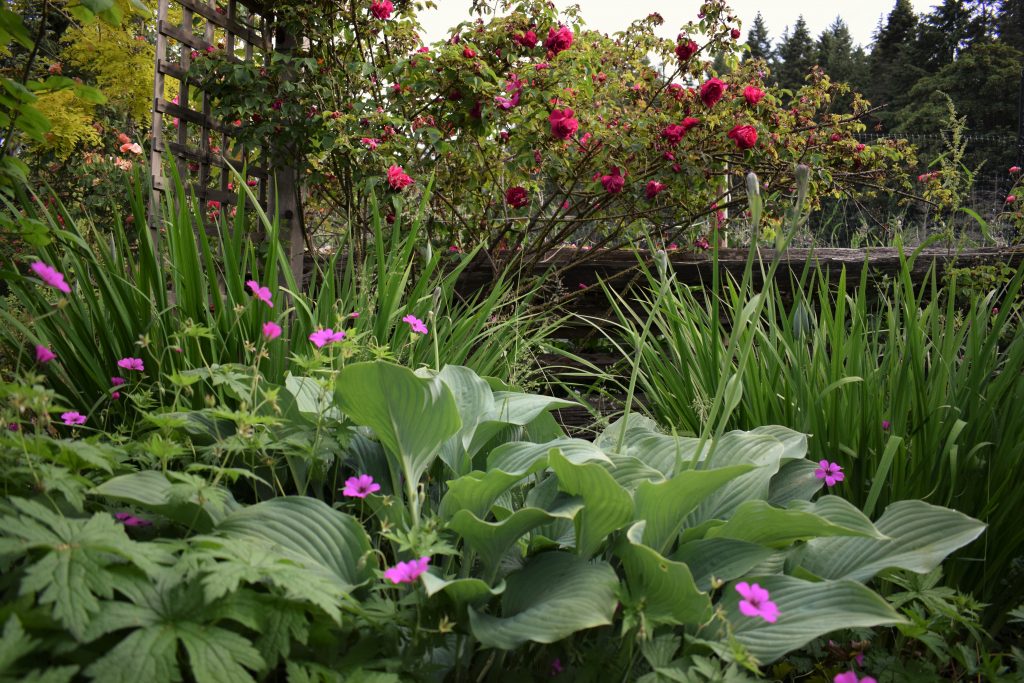 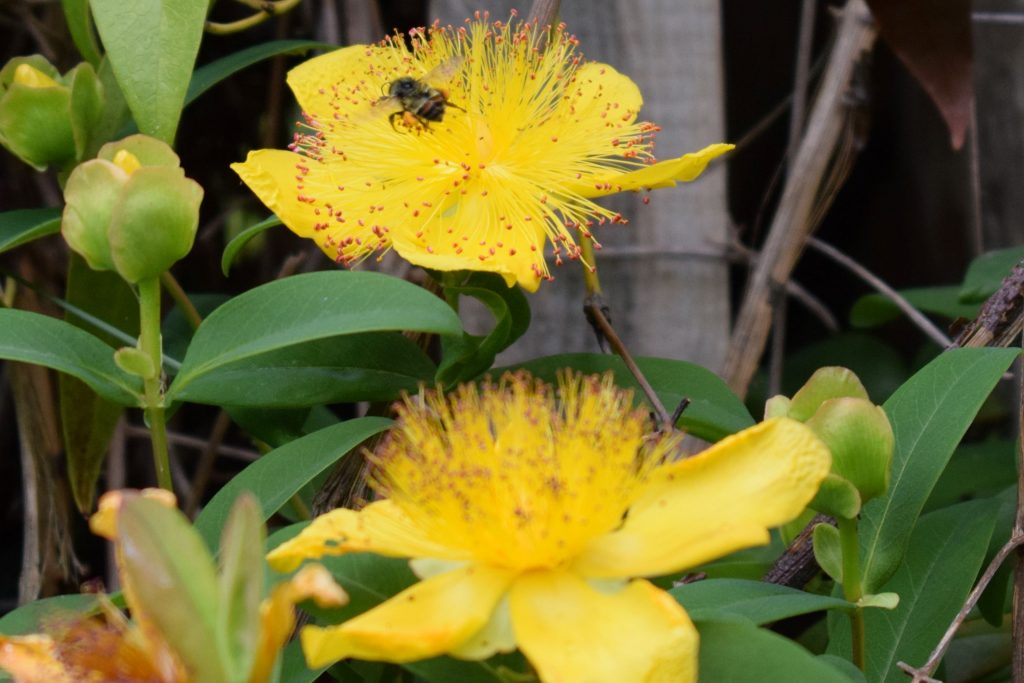 For more about Denman Island, BC, go to VisitDenmanIsland.ca