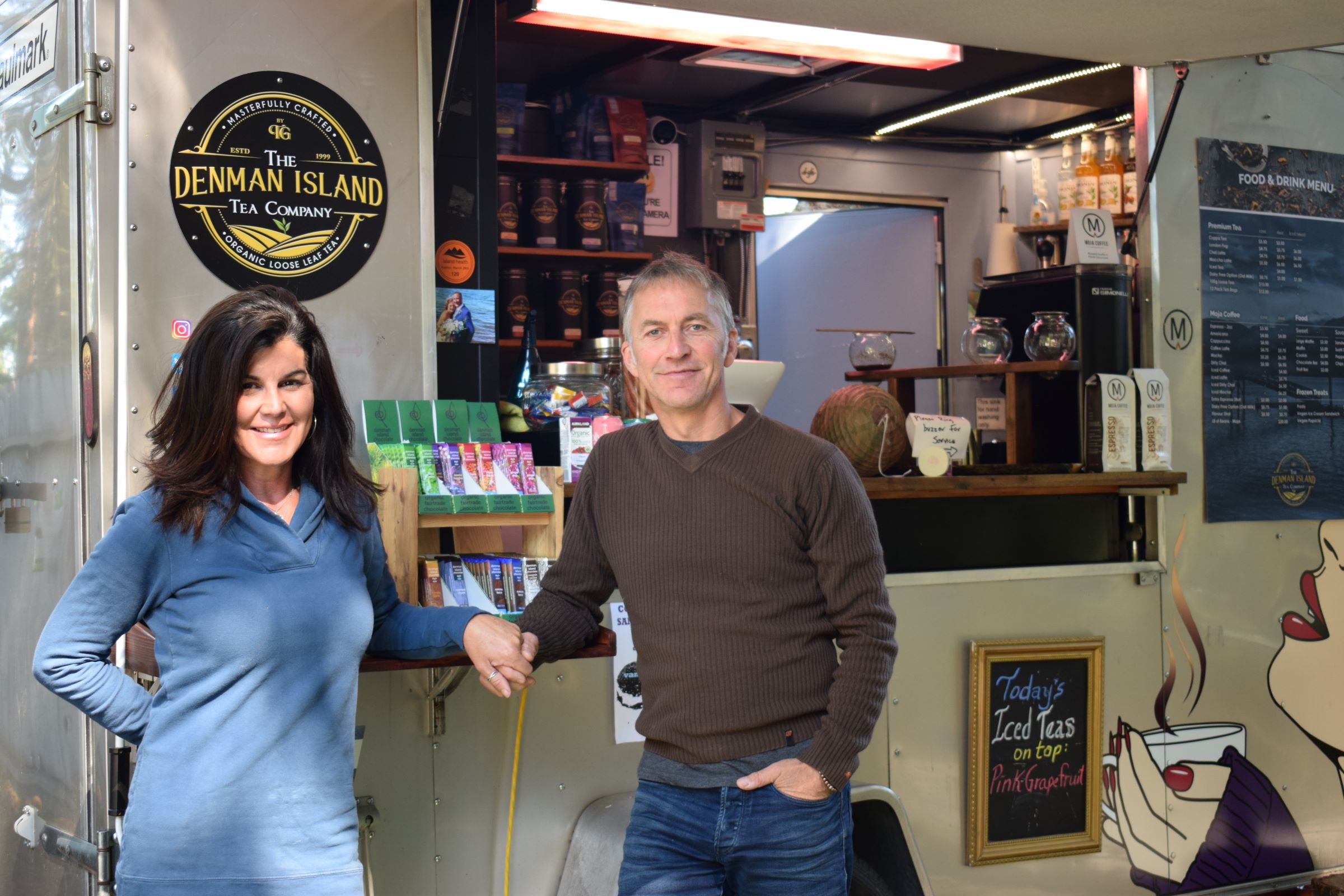 The Denman Island Tea Company is growing – with a new retail tea trailer, a new blending room and warehouse for its wholesale business, and a newly planted field of organic tea.

From Baffin Island to Denman Island, tea has always been a part of owner Brendan Waye’s life. Growing up among the Inuit in the 1960s, hot tea was a part of every day and his father favoured a good cup of tea. Years later, on a Himalayan climbing expedition Brendan watched the basecamp cook making chai.

“I watched him take the black tea, mulch the spices, add the cinnamon and ginger, and brew it all up into this beautiful concoction.”

He was hooked on brewing. He went on to open the successful Steeps chain of urban tea houses in Alberta. Then, tired of the retail side, he began creating his own premium, organic tea blends in BC as The Teaguy. Since relocating to Denman Island in 2017, he renamed the company and revamped the packaging for his new vision: The Denman Island Tea Company.

The natural next step is to grow his own tea.

“I moved here with the sole purpose of planting tea bushes,” says Brendan. “Because of Denman’s agricultural history, the orchards, the amount of produce grown, the southwest aspect of the island in the shadow of the Beaufort Mountain Range – and it’s so clean, there hasn’t been heavy industry affecting it. There are a few small tea growers around – but they consider themselves more hobbyists than commercial. This would be Canada’s first serious commercial tea plantation.” 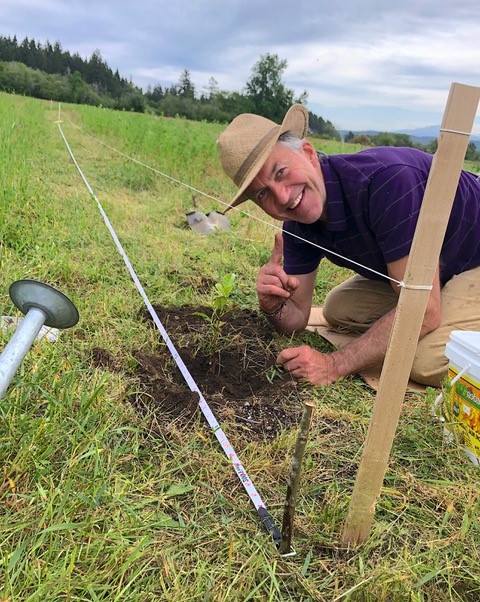 This year, Brendan and his partner Wendy planted 450 Camellia sinensis tea plants on three acres of leased farmland on the west central side of the Island, with another 100 plants ready to go into the ground in the next week or so.

Like many agricultural businesses, Covid-19 has impacted the tea industry. Shortages of harvesters and processors world-wide has dwindled supply. “It’s a major upheaval in the tea world. Demand for high-end tea has grown in the past decade from 7-11 percent per year. We have to prepare for a supply and demand imbalance.”

Brendan plans to plant between 500 and 1000 new plants each year and he expects his first small harvest in 2023.

“I’ll never be able to meet my own demand, but I’ll know that in every blend I can add a little Denman-grown tea.”

For Brendan, it is also a legacy project. “These tea bushes will carry on and produce for 100 to 150 years – long after I’m gone.” 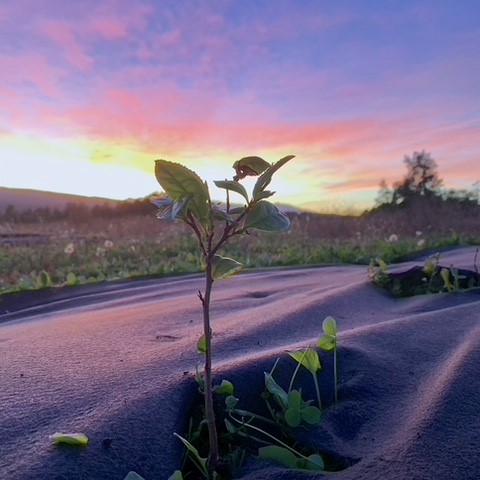 Today, using premium-quality organic teas from around the world, The Denman Island Tea Company has 65 different blends available for order on their website Denmantea.ca. 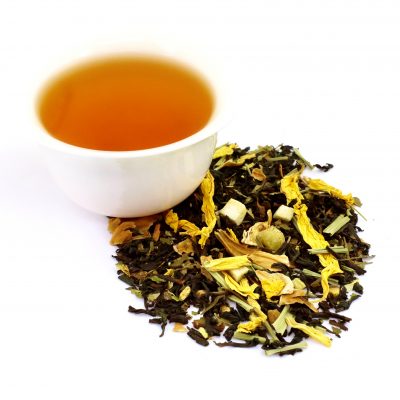 “We keep quality high because we’re constantly cupping – cupping is the way we brew the tea and taste the tea to compare them. It’s an endless opportunity to experiment and experience.” 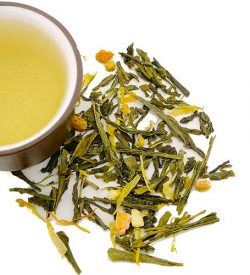 New releases inspired by Denman Island are “Island Chai Latte” and “Hemp love” – a herbal infusion of fruity, sweet and sour with hemp leaves for a surprising, exotic Kombucha taste. 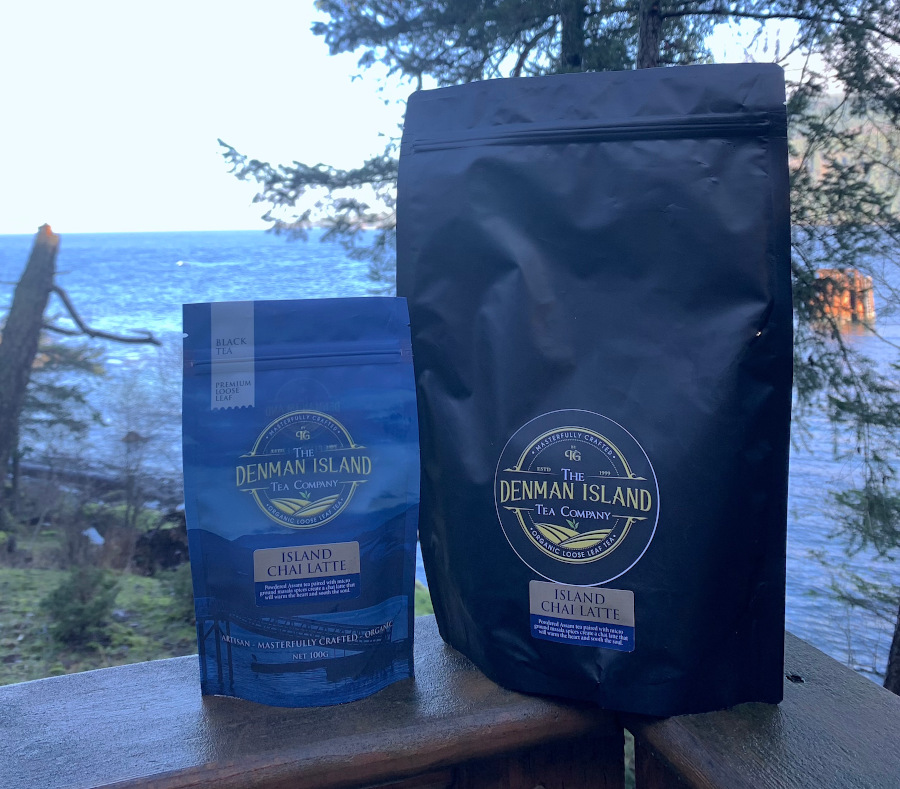 Brendan is excited about his latest tea acquisition, “Okayti Darjeeling, a superior second flush harvested just a month ago, on its way to Denman as we speak.”

Locally, you can find a selection of Denman Island Tea Company’s best-sellers at The Denman Craft Shop and the Denman General Store. It’s also available on Vancouver Island at Lefty’s, Karma Coffee and the Local Refillery.

It was a difficult year to start a new business, but The Denman Island Tea Company’s tea/coffee trailer’s new arrival adjacent to the Gravelly Bay ferry terminal was so successful that they expect to provide three to five local jobs next year. They tracked approximately 950 visits a month through the high tourism season from June through September.

“It was a very busy season,” says Wendy Massey, Brendan’s partner in life and in the tea business. Along with serving customers, Wendy takes care of administration, bookkeeping, marketing and social media. “But the customers have been great, following Covid protocols and social distancing in line.”

“Semilla was our first hire and has been with us since Day 1 in February 2017,” says Brendan “A Denman native, funny & gregarious, she is an integral part of our success on this island.” 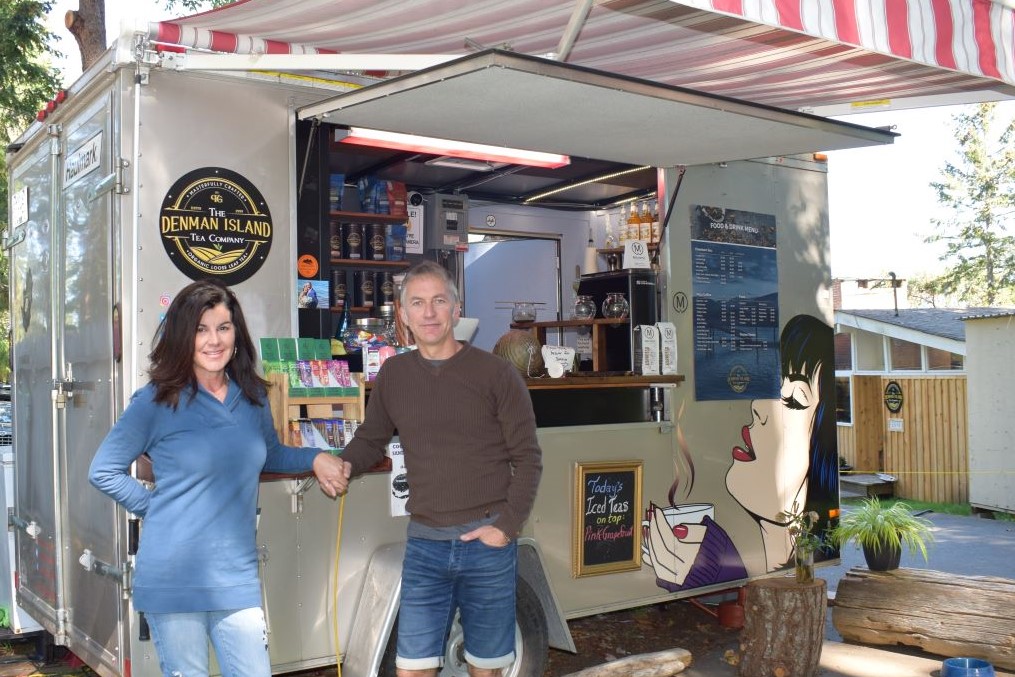 With the tourist season winding down, they hope Denman Islanders will stop in for a treat to go or stay awhile at one of the tables in the small, fenced area. They are planning a local’s customer appreciation day Thursday, Sept. 17 from 10 a.m. to 4 p.m. and are offering a free cup of tea or Americano or Espresso Coffee, or iced tea, as well as 50% off Liège waffles, frozen treats, frostys and sushi snax. Every purchase will enter your email address into a draw for an Abloom Glass Teapot & Warmer Set and 100 mg bag of loose-leaf tea. The draw takes place on Friday, Sept. 18.

The tea trailer’s new regular hours of operation will be Fridays from 10 a.m. to 4 p.m., weather permitting.

During my visit to the tea trailer, I tried my first London Fog, which Brendan describes as ‘Earl Grey on steroids, with notes of bergamot’, brewed before your eyes in a hand blown glass tea steeper called the T-Drop, made rich and creamy with dairy or oat milk. London Fog is the second-best seller at the tea trailer, only behind the popular Cream Earl Grey. No surprise that the London Fog, and the accompanying fresh, warm Leige waffle, was delicious! 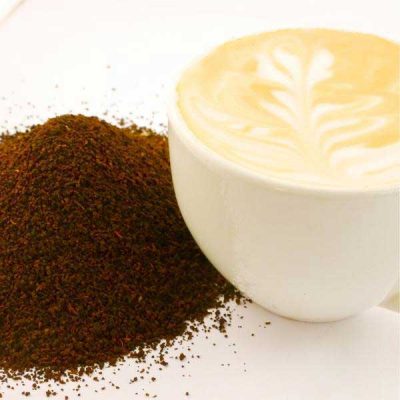 London Fog – a creamy ‘Earl grey on steroids with notes of Bergamot’ is the 2nd best-seller at the Denman Island Tea Company’s tea trailer, just behind the original Cream Earl Grey.

At the trailer, along with their premium teas, coffee and treats, they support fellow Denman businesses by carrying Denman Island Organic Chocolate and Ima’s Kitchen vegan ice cream.

The community spirit is part of what has made their transition to island life even more than they hoped for.

“We’re so grateful for the community support. So many people have stepped up to help with building and input, and just a genuine eagerness to see what we’re doing,” says Brendan. “We intend to represent the Denman Island name as synonymous with premium quality organic tea.”

Aside from the business of tea, Denman Island is where they now feel rooted.

“I love that we have this life here. You know we are gifted with this sweet spot on the planet. We’re grateful every day that we ended up here.”

Published in The Islands Grapevine, September 17, 2020

Take a Garden Tour for Inspiration!