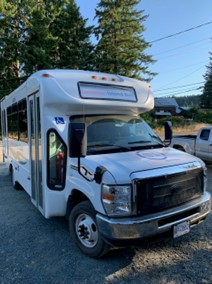 Connections may be made to the Hornby Bus Service at Shingle Spit. Connections to Courtenay and Comox using public transit may be made at Buckley Bay via the  Fanny Bay No. 10. Buckley Bay is also a regular drop off for the Island Link Bus , running between Victoria and Campbell River and all points in between.