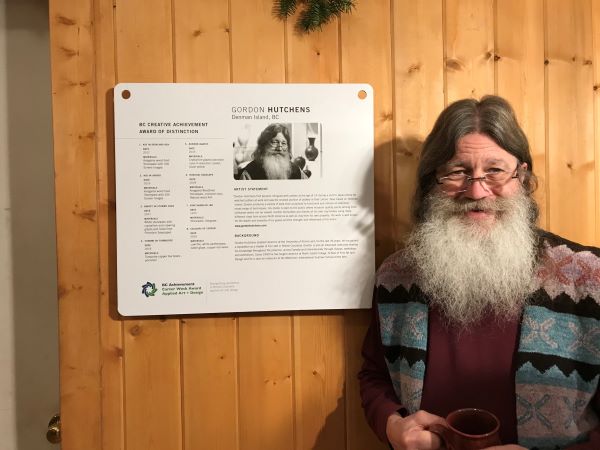 Denman Island master potter Gordon Hutchens has been honoured with an achievement award for his 46-year contribution to the British Columbia arts community.

On November 27 Gordon attended the award ceremony and dinner with his wife Sandy at the Roundhouse arts centre in Vancouver, where he received the Creative Achievement Award of Distinction, Carter Wosk Award in Applied Art + Design from the BC Achievement Foundation. His work was part of the public exhibition curated by Sam Carter at the Roundhouse November 23-27.

“It was an incredible event!” said Gordon.

The Carter Wosk Awards, (named in honour of BC philanthropist, academic and visionary Dr. Yosef Wosk, Ph.D., OBC and Sam Carter, BC educator, designer and curator), recognizes and celebrates some of BCs most exceptional artists and designers whose work directly contributes to the cultural and economic fabric of the province.

Nominated by the Craft Council of BC, in early October Gordon received a call that he had been selected as the Award of Distinction laureate.

“I was surprised – pleasantly surprised. I had no idea.”

He also received a letter of congratulations from BC Premier John Horgan, who wrote: “Through your fantastic pottery, you have used your passion and creativity to enrich the lives of your fellow British Columbians, making you well deserving of this prestigious award.”

Gordon is one of the original potters arriving on Denman Island the 1970s and he is a major supporter of arts on the Island, as a mentor, art show and pottery tour coordinator, and host to dozens of BC potters who come to use his hand-built Tozan-style Anagama wood-fired kiln each year.

Gordon has an honours degree in Fine Arts, and has exhibited extensively in Canada, the U.S., and Japan. He has permanent collections in the Bronfman Family’s “Claridge Collection”, the Canadian Museum of Civilization, the Art Gallery of Greater Victoria and the Burlington Art Centre. He is currently the instructor of North Island College’s School of Fine Art and Design Professional Potter program.

During his acceptance speech, Gordon said, “It’s been a lifelong passion for me. And it still is! In a couple weeks I’m turning 70, I can’t believe it. It’s so exciting. And I’m still excited every day when I go to work. There’s a limitless amount of possibilities of things that I still haven’t done. And I hope I have enough time left to achieve.”

Gordon noted another Denman Island connection to the BC Achievement awards. Sholto Scruton, son of Denman Islander Judith Scruton, won a Carter Wosk award in Furniture and Industrial Design. Sholto is a seasoned furniture maker, having learned from his father, uncle and grandfather.

“I really enjoyed meeting him and think that the works he had on display were both magnificent and thoughtful,” said Gordon. 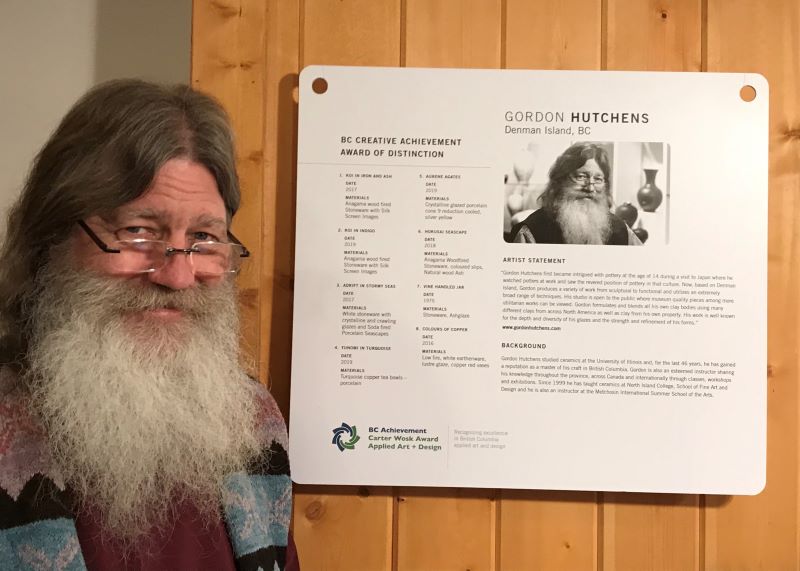 See this video clip from the award ceremony by Stephen Hawkins.

by Trish Weatherall, As published in the Islands Grapevine, Dec. 5, 2019